Open differentials are the most basic form of a differential for the RTAWD/RT4WD Honda. The purpose is to allow for different speeds between the two wheels, while torque split is held constant at 50/50. A common misconception with open differentials is when one-wheel slips 100% of the torque is sent to it. This is not true, however and the amount of torque sent to the wheel with traction is very low because the amount the torque required to spin a wheel is low. Remember, both wheels always receive equal torque, but if one has no resistance the amount of torque sent to the drive axle as a result is very low. The advantages of open differential are that both axles can have completely different wheel speeds. This means no wheel slip will occur while going around a corner, as the outside tire can move freely and travel further than its counterpart. From an efficiency standpoint, less energy will be lost through the differential versus alternative options and the cost to manufacture and purchase these open differentials is very low due to the simplicity of their design. The disadvantages are when one wheel has poor traction, this dramatically limits the amount of power the vehicle can transfer to the ground in the rear. Because the torque distribution is always 50/50, if one-wheel can’t gain traction the other will receive an equally low amount of torque limiting performance dramatically.

Locked differentials are the polar opposite of the spectrum versus open diffs. The purpose is for wheel speed to remain constant between the two wheels. The major benefit is that torque will go to the wheel with traction, up to 100% to a single wheel. For off-road use, it is common for the differential to have a locking feature. Though there are several aftermarket companies that manufacture lockers they typically do not function well on the street where high traction areas would require one wheel to travel faster than another in a turn. The advantages of a locking differential are that it allows for torque to go to the wheel with the most traction. For all differential styles, this will allow for the most torque to reach the ground on any surface condition. For off-road use where tire wear is not an issue, this is about as good as it gets. Robust, simple, and very effective in operation. In situations where it’s desirable to keep wheel speed constant on an axle (ex: drifting), this is an easy solution (a welded differential works exactly the same). But the disadvantages are a locked differential will not allow for wheel speed differences between the right and left wheels. This means additional tire wear will happen as well as binding within the drivetrain as a result. 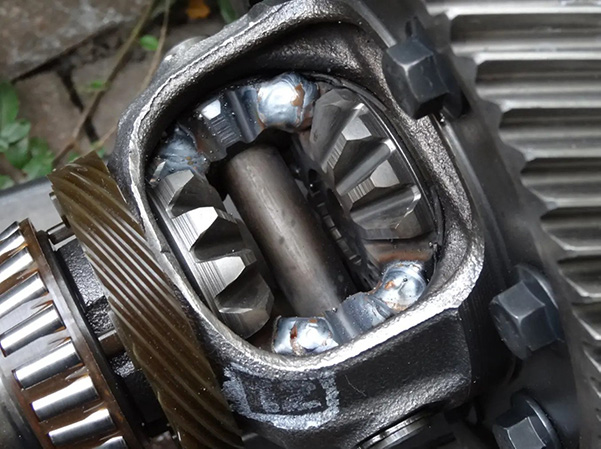 A Torsen differential is considered the king of the castle for your AWD/ 4WD Honda Rear Differential. They work in a fairly similar fashion to a locker using clever gearing to apply locking force to transfer torque to the wheel with more grip. They’re great for street use and even track use, though they do have disadvantages. The advantage of a Torsen rear LSD is the differential begins to send more torque to the slower-rotating wheel the instant there is a speed variation between the 2 drive axles. Essentially, it reacts extremely quick to transfer power immediately to the wheel with traction. Internally they are mechanical lockers with no routine maintenance required as the differential action is dependent upon friction throughout the gears. However, they still come with a disadvantage in their operation. When one wheel loses traction, a Torsen diff acts almost like an open differential. In this situation it sends very little torque to the axle with traction. For street use this is completely acceptable, but it may be an issue for more purpose built vehicles on the track.

So What is the right option for you!

Street;
If you’re looking for a LSD to help get the power to the ground and prevent one tire fires, a Torsen or Progressive differential is a great option for street use. These can be found in the Subaru STI, Toyota GT86, Ford Mustang GT (with performance package), and Mitsubishi Evolution to name a few.

Drift/Rally;
For drifting or rally driving, occasionally a two-way LSD or Welded Differential may be the best option and is more desirable in these scenarios for wheel speeds to remain relatively equal.

Chemical: Try to avoid use or else you may end up going around in a van trying to unmask ghosts.